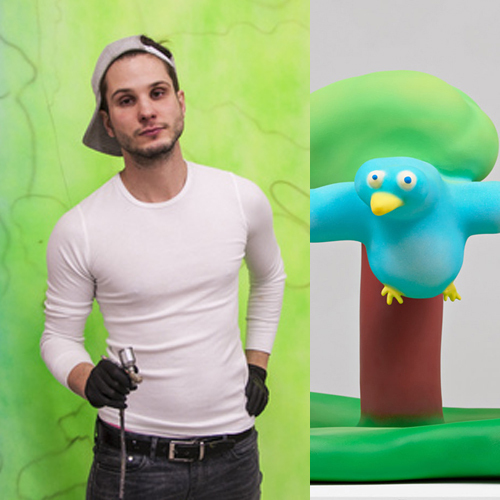 Using both analog and digital processes, Austin Lee blends abstraction and figuration, humor and pathos, in exuberant paintings and sculptures that evoke the early internet.

He initially mocks up many of his canvases using virtual reality modeling software (an update from Photoshop, which he used earlier in his career) and 3D prints many of his sculptures in bronze and plastic. Lee then recreates a distinctly digital aesthetic with airbrush and paintbrush.

Working at small and large scales, the artist saturates his work with glowing, electric hues. Humans, animals, and hybrid creatures are frequent motifs, and Lee understands his compositions and hand-painted structures as animated representations of his own feelings. He studied at the Tyler School of Art in Philadelphia before receiving his MFA from Yale in 2013. Since then, he has exhibited in New York, Stockholm, London, Paris, Berlin, Beijing, Hong Kong, and Tokyo, among other cities.