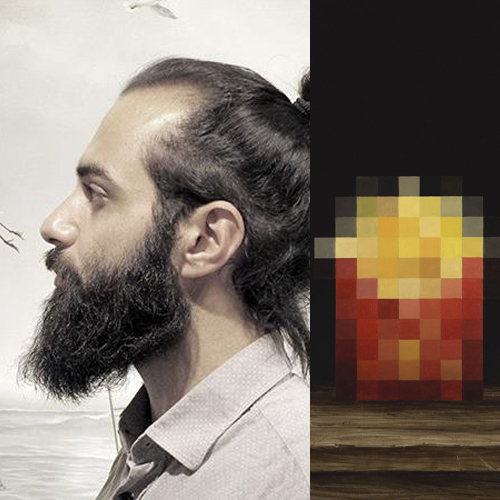 Aldo Sergio was born in Salerno in 1982. After graduating in art, he studied anthropology at the University of Perugia, an experience that led him to develop a holistic approach to art. “I obstruct what we think we know. While it may seem artificial to obstruct an image, every real situation contains doubt, and my job is to highlight certainties by omission.

To underline certainties by omission and, in doing so, I hope to preserve doubt. I am interested in the visual and intellectual consequences of the disappearance of a certainty. If the task of contemporary art is to understand the mechanism of thought, in my work I feel the need to alter, in order to provoke the viewer’s consciousness, his certainties and doubts.”   This is how the artist manages to create two movements, one vertical, the other horizontal. Vertical in the viewer’s mind, which rises in response to the content of his work and a horizontal movement that consists of physically approaching and moving away from the canvas, in an effort to attract the viewer’s attention, to find a clearer visual experience of the canvas.

There are four parts to his universe. The divine, the human, the classical and the contemporary. Everything he does can be located somewhere on this four axis space. It can be close to heaven but still contain a strong relationship with Italian folklore. Then there is the next step, the censorship, the obscuring of the certainty.