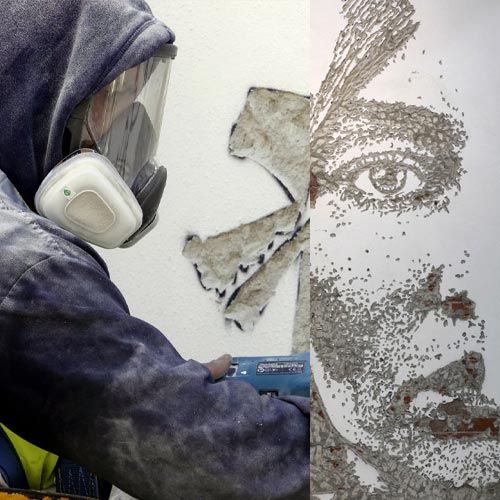 Vhils is the pseudonym of Alexandre Farto, Portuguese street artist. He is one of the most skilled and talented young artists in the current urban art scene.

This internationally renowned innovator creates technically skilled portraits on the streets of the world. Instead of simply adding paint or other common urban art materials to surfaces, Vhils sculpts, drills, scratches, rips, and blasts his images from architectural walls. Although he has become famous for these fascinating chiseled facade portraits, Alexandre Farto has been visually interacting with urban environments since his days as a graffiti artist in the early 2000s. Alexandre studied at the University of the Arts - Central St Martins College of Art and Design.

As a graduate of London, Alexandre Farto is fully aware of the influence that the history of this city has had on his artistic activities. He felt compelled to communicate the essence and transition that the streets of London have experienced and to channel these elements through his own work. His work gained a lot of attention in 2008, when a face carved into a wall appeared next to a painting by artist Banksy in London at the Cans festival.

A photo of him creating the work made the front page of TIMES. However, his groundbreaking sculpting technique was first presented to the public a year earlier at the VSP Group exhibition in Lisbon, where it was hailed as one of the most compelling approaches to street art in recent years.