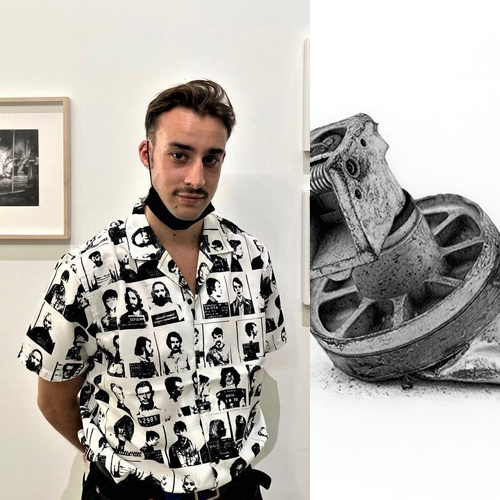 Born in Le Mans on March 12, 1996 to an Italian mother and a French father. Tiziano lives and works in Montreuil. His school career began at the School of Fine Arts in Le Mans where he obtained a degree, then he went to study at the Academy of Fine Arts of Brera in Milan for his 4th year in the graphic department and print. It is at this time that Tiziano deepened his practice of drawing. He ended up joining the Kourtrajmé school in the first section dedicated to Art and Image, directed by JR. This training ended around the exhibition "so far so good" at the Palais de Tokyo.

The artist works on the question of the image through different mediums: silver photography, printmaking, publishing and drawing which are his central practice. His drawings always start from the real, from photographs that he takes, borrows, assembles and composes. Drawing has been an outlet for him since the beginning. Two things channeled his youthful anger: drawing and boxing.

"For me these practices are linked, they echo each other in the sense that when I draw, there is this idea of surpassing oneself. Like a fight against oneself. A learning through pain that is physical and mental because of the fact of drawing for hours, days after days, going further and further in the difficulty and technical mastery.

The subjects explored are always based on current events, social and political themes. His work today questions the uprising, the revolt, the persistence of popular insurrections and their filiation. This interest began when he arrived in Paris. At that time, large demonstrations were breaking out in the capital, in which Tiziano went to take photographs.   It was at the Palais de Tokyo that his series of drawings on this subject began.