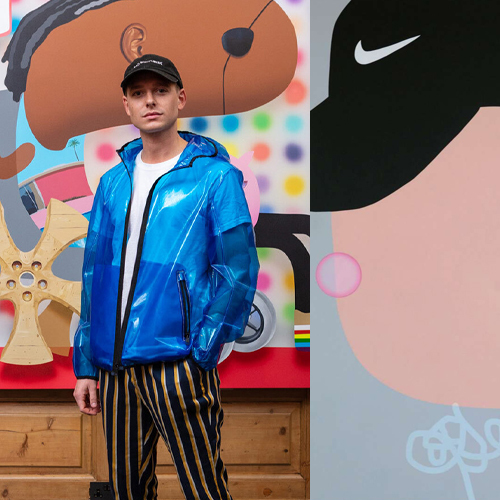 Oli Epp (b. 1994) is a painter who lives and works in London. He uses oil, acrylic, airbrush and linear masking to create highly stylized, sharply contoured paintings of the human figure reduced to object status.

His archetypes - the pumped-up flight attendant, the collector, the drag queen, the gimp, the nightclub hostess, the self-portrait, among many others - are reduced to geometric or serpentine shapes, the calculated symmetry making each body part simply meaningful, regardless of the presumed hierarchy of the human figure as the primary subject.

With characteristic lightness of touch, the artist draws his subjects from the world around him - exploring aspirational lifestyles, gender fluidity, sexual objectification and the relentless commercialization of art - while questioning the agency of the individual. His subjects, both human and animal, are broken down and re-presented as commodities: humans being both the consumer and the consumed product.   In 2017, Oli Epp coined the term "Post-Digital Pop" to define his aesthetic, using a bright color palette and compositional clarity that owes much to the legacy of Surrealism, British pop art, and the neo-plasticity of the De Stijl movement. He described the term thus: "'Post-digital' has something to do with our current relationship to digital space.

Epp's work is included in numerous private and public collections, including the Victoria & Albert Museum, the Hall Art Foundation, the Beth Rudin DeWoody Collection and the Ruth Borchard Next Generation Collection.