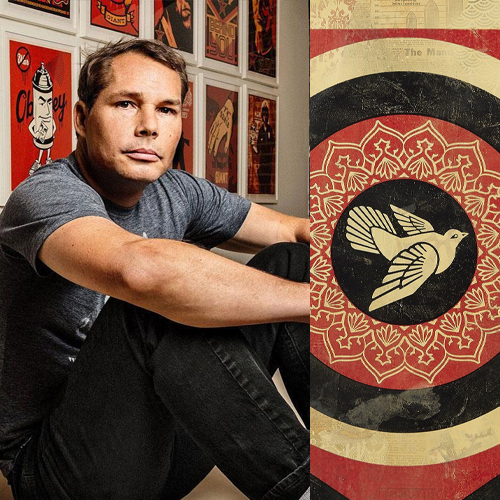 Frank Shepard Fairey or Shepard Fairey, also known as OBEY, was born on February 15, 1970 in Charleston, South Carolina. He is an American street artist, silkscreen artist, muralist and illustrator.

Frank Fairey was born and raised in Charleston, South Carolina. His father was a doctor at the time. He became involved in art in 1984, at the age of 14, and began drawing for t-shirts and skateboards. Fairey graduated from Wando High School in 1988. While entering the Rhode Island School of Design (RISD) in 1989, he created the Andre the Giant Has a Posse sticker campaign, resulting in the Obey Giant campaign. The campaign became, in Fairey's words, an "experiment in phenomenology." He graduated from RISD in 1992 with an MFA in illustration5 and currently resides in Los Angeles, California with his wife Amanda and daughters Vivienne and Madeline.

Using the slogan The Medium is the Message borrowed from Marshall McLuhan, Fairey has become one of the most well-known artists of the 2000s. Originally part of the BLK/MRKT graphic design group with other graphic designers and artist Dave Kinsey, Fairey left in 2003 and joined Studio Number One. In 2004, Fairey, Robbie Conal and Mear One (en) made a series of "anti-war, anti-Bush" posters for the Post Gen collective for a street art campaign called "Be the Revolution ".

His work can be found in the collections of the Smithsonian, the Los Angeles Country Museum of Art, the Museum of Modern Art in New York, and the Victoria and Albert Museum in London. His first museum retrospective Supply & Demand (of the same name as his book) opened at the Institute of Contemporary Art in Boston from February 6 to August 16, 20099. He continued his graffiti activities, however, which led to another arrest in February 2010.