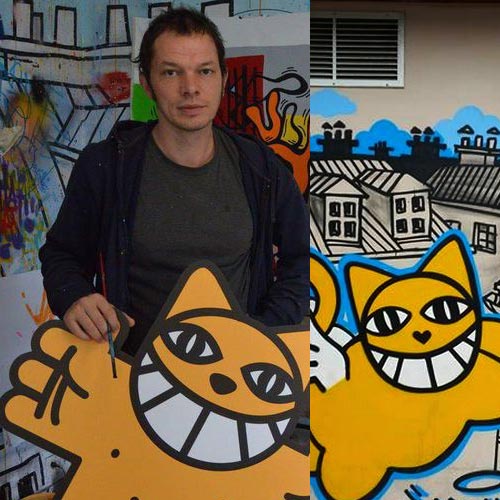 Thoma Vuille, alias Monsieur Chat, is a French-Swiss urban art painter born on July 16, 19771 in Boudry, in the canton of Neuchâtel. He is the creator of the graphic series of Mr. CHAT, a smiling feline character created in the streets of Orleans in an approach combining optimism, transgression and culture of proximity. Thoma Vuille began painting in the streets with acrylics at the age of 15, in memory of his grandfather, a house painter. After a professional baccalaureate in civil engineering, he studied at the Institute of Visual Arts in Orleans from 1995 to 20012. He became known as the author of the Mr. CHAT series, graphic creations representing a yellow-orange cat with a broad smile, usually done with acrylic paint on walls.

The idea came to him in 1997 during a workshop in a school in Orleans during which a little girl drew a cat that inspired the artist. He then undertook to paint his cat on the walls of the city of Orleans, preferably on the roofs, with the sole objective of "putting human and love in the city: Orleans was a rather gray city and we needed a little sunshine everywhere. He intends to convey the optimism of this animal with a broad smile. He signs his works with a mysterious "Mr. CHAT", to "know if a drawing can live without a creator". He thus suggests that behind these graffiti hides a collective of artists.

Thoma Vuille then began an international career. He painted his Mr. CHAT in Tours, Nantes, Saint-Etienne, Paris, London, Vienna, Geneva and New York, then the now famous cat appeared in 2004 on the esplanade of the Centre Pompidou for the television film Chats perchés by Chris Marker, in 2005 on the tramway in Sarajevo, in 2006 in a New York demonstration