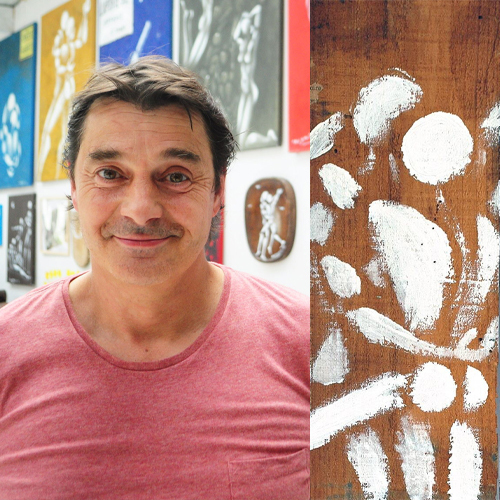 Jérôme Mesnager was born on January 29, 1961 in Colmar. He entered the Ecole Boulle in 1974 where he received training as a cabinetmaker, a subject he would later teach at the same school. In 1979, he attended the comic strip classes of Yves Got and Georges Pichard, teachers at the School of Applied Arts.

In 1982, Jérôme Mesnager is the co-founder of Zig-Zag, a group of young artists who invest in "zig-zagging the jungle of the cities" and revitalize abandoned places with many graffiti. With his body covered in white paint, Jérôme wanders through these spaces and, on January 16, 1983, projects his first White Man on the wall of the Petite Ceinture, "a symbol of light, strength and peace.

From then on, the white body was displayed all over Paris, exploring factories and abandoned train stations, not to mention cellars and catacombs... before setting out to conquer the whole world: Italy, Senegal, Gambia, Mauritania, the United States, Egypt, Japan and China.