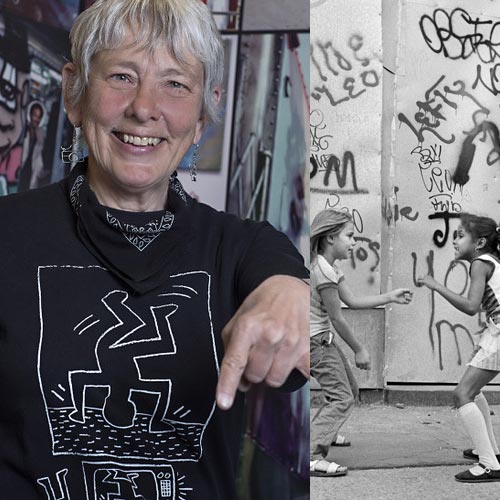 Martha Cooper was born in Maryland and began taking photographs at the age of three. At sixteen, she graduated from high school, then earned an art degree from Grinnell College in 1962. She taught English as a Peace Corps volunteer in Thailand.

After a motorcycle trip from Bangkok to London, she graduated from Oxford University with a degree in anthropology.  Her first experience in art photography was during a trip to Japan, where she decided to capture images of intricate tattoos. In the 1960s, she joined National Geographic as an intern. During the 1970s, Martha Cooper worked as a photographer for the New York Post. She is best known for documenting the burgeoning graffiti scene of the 1970s and 1980s in New York1.

Her photographs were also published in the Smithsonian and Natural History, as well as in several dozen books and magazines. As soon as her contract at the New York Post ended, Martha Cooper began photographing children in her New York City neighborhood. She met a young boy, Edwin Serrano (He3), with whom she roamed the streets looking for graffiti. He explains to her that graffiti is an art form in its own right and that each artist imposes his nickname on a surface.   Edwin Serrano introduces her to the American graffiti artist Dondi White, who becomes the first artist to accept that the photographer accompany him and immortalize his work. Martha Cooper was fascinated by the underground subculture created by these graffiti artists. In 1984, Maria Cooper and American photographer Henry Chalfant published their photographs of New York graffiti in the book Subway Art, considered "the bible of street art".

In 2009, sales reached nearly 500,000 copies. In the 1980s, she worked briefly in Belize to photograph the inhabitants and the archaeological remains of the Mayan culture at sites such as Nohmul and Cuello.   For the art project One week with 1UP, in collaboration with photographer Ninja K, Martha Cooper invites viewers to follow a collective of Berlin graffiti artists through their favorite graffiti locations. Martha Cooper is the director of photography at City Lore, New York's center for urban pop culture.