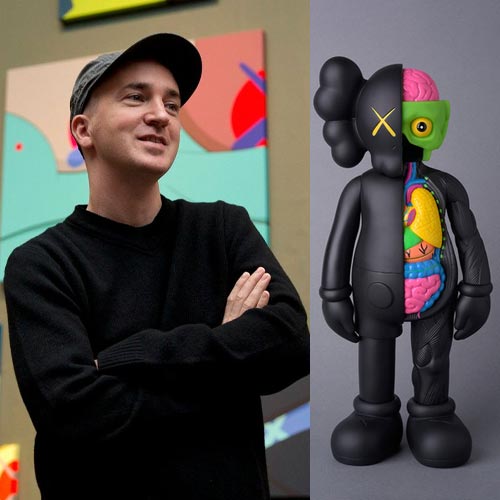 He was born in 1974 in Jersey City. Growing up in the northeastern state, he spent hours copying graffiti images onto paper. He switched to a more low-key form of interventionist street art in the mid-1990s, when he began unlocking the glass panels that covered bus stop and phone booth advertisements, stealing the sign, changing it, and putting it back up. Brian Donnelly (KAWS), is so skilled at his pranks, that no one could ever tell his work from the original ad.

In the late 1990s, KAWS began designing and producing limited edition vinyl toys - an immediate hit with the global art toy collecting community, especially in Japan. KAWS' acrylic paintings and sculptures feature many repetitive images, all intended to be universally understood, transcending languages and cultures. One of KAWS's first series, Package Paintings, was made in 2000. This series, entitled The Kimpsons, subverted the famous American cartoon, The Simpsons.

In addition, KAWS reworked other familiar icons such as Mickey Mouse, the Michelin Man, the Smurfs and SpongeBob SquarePants. He acquired a building not far from his Brooklyn studio, which his friend, interior designer Katayama, converted into a huge studio that would become the creative center of the KAWS universe.