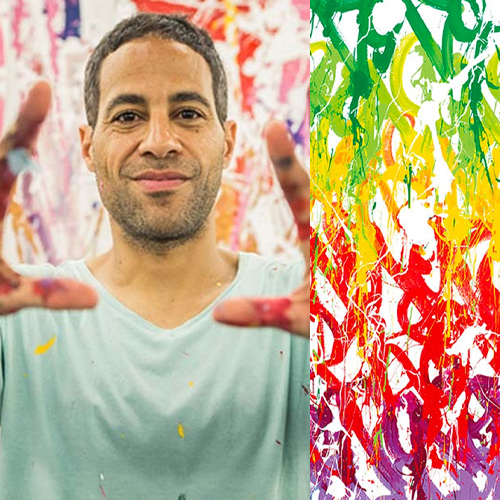 Artist, graffiti artist and painter, John Andrew Perello, better known as JonOne, was born in New York in 1963. He began tagging in the streets of Harlem at the age of 17, decorating walls and subway trains with his lettering and his then blaze: “Jon156”
It is his meeting with A-One (alias Anthony Clark), friend of Jean-Michel Basquiat, at the turn of the 1980s, that will forever define his status as an artist.

In 1987, he left the United States for Paris, after meeting the artist Bando (Philippe Lehman, his real name) who invited him there, and where he criss-crossed the streets of the capital in the company of the pioneers of French graffiti and hip hop, leaving his own pictorial mark as they descended. From then on, JonOne went from urban art to canvas, as a perfect self-taught artist, developing a universe where graffiti and lettering are mixed, memories of his New York years, but also what he calls his “freestyle”, full of colors and marked by a boundless freedom. Vitality, mastery of form and color, dynamic gesture, abstract expressionism, all concur to the success for which the street artist is preparing.

JonOne exhibits and is now collected all over the world: from Paris to New York, via Berlin, Tokyo or Hong Kong, street art collectors and contemporary art institutions all want to display a work by the American urban artist.