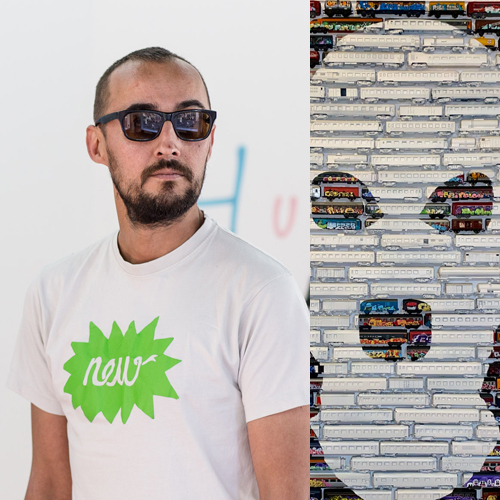 Gris1 is a French artist born in 1981, he starts to be interested in art in 1996, when he is in college. At first, he tries his hand on public walls and discovers what graffiti really is. 20 years later, from festivals to exhibitions, he exports his passion and his name, asserts his thirst for freedom by mixing supports (canvas, wood) but also styles and techniques.

The particularity of Gris1's studio work is his ability to mix different supports, styles and techniques to create a single work. This patchwork has become one of the characteristics of his work, like a puzzle composed of different universes that intersect and make sense to him.

He is a member of Da Mental Vaporz (DMV). DMV is a group of French graffiti artists composed of Bom.K, Blo, Brusk, Dran, Gris1, Iso, Jaw, Kan, Sowat & Lek created in 1999 by Bom.k and Iso in the suburb of Paris. Soon joined by Kan, they distinguished themselves by making huge paintings on walls in the southern suburbs, featuring various traditional graffiti subjects (confined to block letters or cartoon characters). The works of these artists can speak for themselves independently, differing from one another primarily in medium as well as style and technique, which, when shown in a common context, creates an extraordinarily interesting relationship.

As different as these styles seem, the artists are nevertheless able, in their commonly created works, to bring together a harmonious symbiosis that, although marked by tension, remains balanced. Thus, their works can span tens of meters high and wide, depicting monstrous characters, madness and the impending end of time.   As a member of the DMV group, Gris1 maintains his passion by making large murals and collective paintings. He has come to reinforce the group with his expertise in old school graffiti codes.