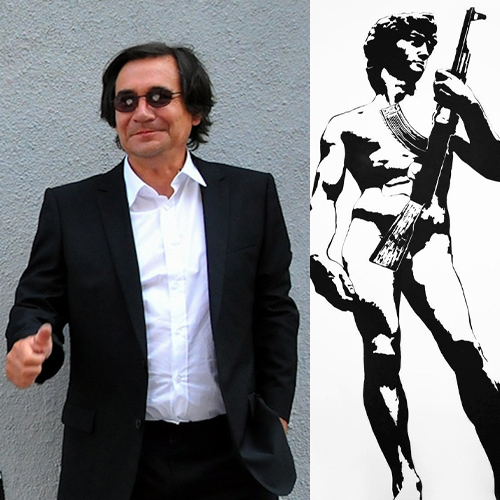 Blek le Rat (pseudonym of Xavier Prou, who was inspired by the comic book character Blek le roc) was one of the first graffiti artists in Paris, and has been described as the "father of stencil".   Xavier Prou began studying at the Ecole des Beaux Arts in Paris in 1972 and obtained his DSAP diploma in 1976. He is internationally recognized (Banksy is one of his admirers who acknowledges his influence) as one of the pioneers of street art.

He started painting in 1981, first with a friend under the collective name of Blek, then alone. In 1992, he was sentenced to a heavy fine in the criminal court for "degradation of property belonging to others". From then on, he no longer painted directly on walls, but on posters that he then pasted. From the 1980s, he was exhibited at the Loft gallery, rue des Beaux-Art in Paris1 and the "Jean Paul Christophe" gallery, Avenue Matignon in Paris, then at the Sanguine gallery.

During the 1980s, 1990s, 2000s and 2010s, he never stopped intervening on the walls of cities around the world. Between 1993 and 2001, he did not exhibit in galleries until 2002 when he exhibited his work in a Berlin gallery, the "Galerie Jurgen Grosse". His paintings usually depict anonymous figures or celebrities in life size. He often draws his inspiration from everyday characters from urban reality, whose image he then reproduces in the setting where he evolves.

Today his work influences thousands of urban artists around the world and it is not surprising to find artists in London, New York or Tokyo who claim to belong to his school. Among them, the English artist Banksy: "Every time I paint something, I discover that Blek the rat has already done it just 20 years before!